This is the fourth and final installment of previews of 2020 conference tournaments, most of the rest of which begin today. 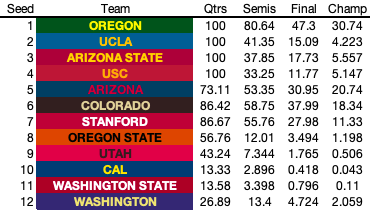 What a strange season it turned out to be in the Pac-12. This is probably the conference where we’re most likely to find a champ that feels “off the board” – a fairly high seed, or someone who had to win an extra game to win the title but does anyway. Top seed Oregon is the favorite for good reason, but 5th-seed Arizona rates almost even with them in BracketBot ratings so it would be a close game should Arizona reach the semifinals; that’s a tricky proposition in and of itself given the strength of last-place Washington, who are rated almost identically to 3rd and 4th seeds ASU and USC. Overall, the bottom half of the bracket is much weaker, which benefits 6th-seed Colorado. 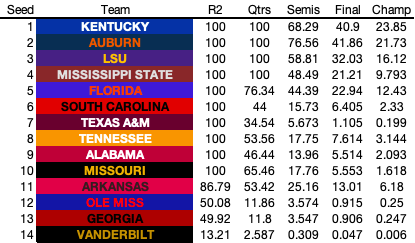 Despite the strong tournament résumés for the top three teams in this league, BracketBot doesn’t actually rate any of them that highly. There are three main cohorts at the top, none of which are really that separated from one another:

It’s not totally far-fetched for any of these nine teams to take home the crown. None of them are actually in BracketBot’s top 20, but all of them are in the top 65. Auburn probably was helped the most by the bracket itself, getting the winner of A&M/Mizzou in the quarterfinals. 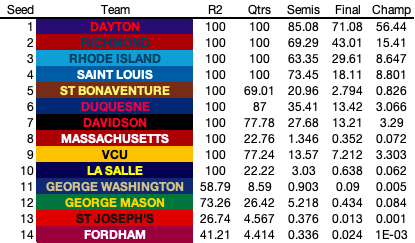 An identical format to that of the SEC, with 4 double-byes and 14 teams total, but the actual preview of the tournament couldn’t really be more different. Dayton ran through conference play undefeated, and should be favored over the field to win this championship. The fact that that probability is only 56% speaks to how difficult it was for even a team as good as Dayton to run the table in a pretty decent A-10 this year. You could say they got a bit unlucky with seedings – having to potentially face both VCU and Saint Louis is a fairly tough road.

Stephen F. Austin blitzed through this league, winning their last 15 games and finishing 19-1 in league play. The Southland is pretty well-suited for the ladder-style format, with SFA usually quite a bit better than most of their conference counterparts, but this year there doesn’t even appear to be a real second banana. At #105, the Jacks rate 80 places higher than any other team in the Southland, and only the top 4 teams lie within the top 250. 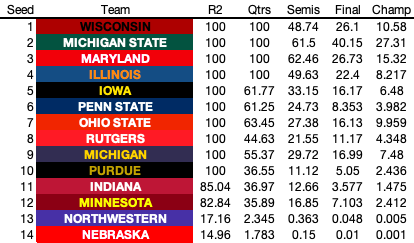 The Big Ten is possibly the most compelling conference tournament, but there aren’t a lot of NCAA tournament implications unless 10th-seeded Purdue can go on a run. The top 9 teams and Indiana are all basically tournament locks, so we can mostly sit back and enjoy some high-quality basketball. Teams 1-12 all rank in BracketBot’s top 41, so it’s no surprise that even though Michigan State is the highest of those teams at #5, their conference championship odds aren’t especially high.

Without a doubt, it’s NMSU’s tournament to lose. The Aggies were the only team other than Dayton to get through this season with a perfect conference record, and 2nd-place Cal Baptist is ineligible for postseason play because it’s their first year in Division I. So the 2-seed in this tournament, UT Rio Grande Valley, had just a 9-7 conference record. Add that all up and it certainly appears the most likely outcome here is that New Mexico State wins this tournament and does so easily. If it isn’t them, it’s hard to determine who might pull it out as the other teams are all fairly evenly matched, but it, uh, won’t be Chicago State.

The Big West tournament is, I believe, unique in being a single-site tournament that still reseeds its teams between rounds. That format gives a slight boost to top seed UC Irvine, who are about 2 percentage points more likely to win the tournament with reseeding than they’d be without it. CSUN is unusually weak for a 2nd-seed, so look for UCSB to be the most likely finalist, non-UCI division. 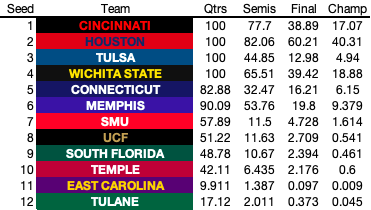 Cincinnati and Houston have met in this tournament’s final two years running, and it could very well be a third, but in BracketBot’s view Wichita State is more likely to come out of Cincinnati’s half of the bracket. In ratings, Houston is the AAC’s best team by a pretty big margin, and drew a pretty easy draw as well by avoiding both the Bearcats and Shockers. If any team is going to play early spoiler to Houston, Memphis has got a shot, but the Tigers really struggled through conference play and only just came in above the .500 mark. Any of the top 7 have a shot but Houston seems like the class of this conference.

This tournament has, at time of writing, been cancelled due to travel fears about COVID-19, but if that decision is reversed, here’s how I see it:

Yale is the best team in the Ivy by a decent amount, and have been “elected” as the league’s representative in the NCAA tournament, so it’s nice to see that they would have been favorites in the weekend tourney despite 2nd seed Harvard having hosting duties. As far as I have heard, Yale is the only of these four schools that is still holding in-person classes, so I suppose it’s not too weird that they’ll be attending NCAA tournament games as I imagine they would have had no problems traveling to Cambridge for this weekend’s bracket.

That covers every conference! I’ll be back early next week with my biggest post of the year, the full NCAA tournament preview!