This is Part 3 of a four-part series previewing this season’s set of conference tournaments. If you missed them, Part 1 can be found here and Part 2 is here. 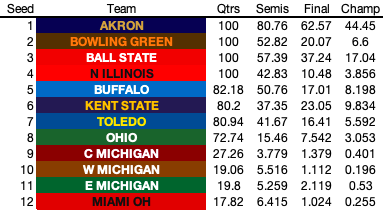 This has been Buffalo’s league to lose for a few years now, but it’s the Zips’ year, at least in theory. Akron is a good bit better than any other MAC team but there are enough teams that are pretty good to make this a tricky road for Akron. Any of the top eight could win without it being too much of a surprise.

No real standouts in the MEAC this season, which means the winner of this tournament is almost guaranteed to head to Dayton for the First Four as a play-in 16 seed. Should still be pretty interesting to see which of these teams comes through, as the top 4 seeds are all fairly evenly matched. Norfolk State actually ranks as the top team in the league in BracketBot’s ratings, but NC Central has a slightly easier road to the final. 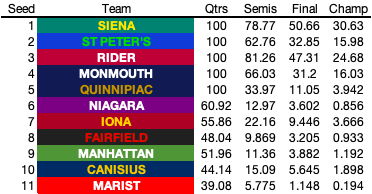 This was an odd season for the MAAC. Rider and Iona came in as roughly co-favorites but the season didn’t go as expected for either of them, Iona especially. Instead, it’s Siena who have really impressed, and they head into Atlantic City as slight favorites over Rider. This is a wide-open tournament, really, with a half-dozen teams having a reasonable chance to win it. Overall, the league really beat up on each other this season – even last-place Marist was just 6-14 in conference play, and 15-5 was enough to win it for the Siena Saints.

It was an exciting conference race in the SWAC this year – the top six teams (of 10 total) finished between 14-4 and 11-7. The SWAC champion will almost certainly be headed to Dayton for a First Four game as usual, but it’ll be interesting to see who it is. Prairie View A&M is a step or two ahead of the pack, and were deserving regular season champs, but there’s not a guarantee here. 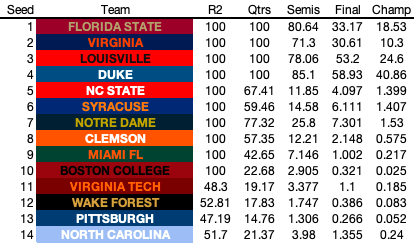 The ACC is the first power conference to tip off, starting off on Tuesday in Greensboro. It’s been a weirdly down year for this conference, as outside of the top four teams, everyone basically fell off a cliff in this conference this season compared to last. Add to that the double-bye bracket format and it’s no surprise that those top four are forecast to have a 94% chance of winning this tournament.

Kansas and Baylor are 1-2 nationally in BracketBot predictive ratings, so it’s no surprise to see them predicted to dominate this tournament. This system does still have a great deal of love for West Virginia despite their late-season slide, but I wonder if the Mountaineers might be overrated by this metric slightly. Their presence on Baylor’s side of the bracket is what makes Kansas seem to be more likely to win this thing. 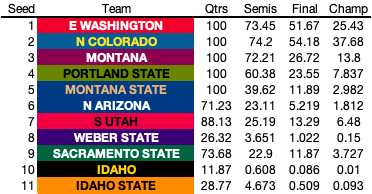 Northern Colorado (or, the good UNC, if you will) is one of the more overlooked teams in college basketball this season – a team that would be really scary as a 15-seed, say. They get top billing here despite not being the conference champion in the regular season; Eastern Washington earned the top spot thanks in part to sweeping UNC in conference play, and winning the league by a game. As far as lower seeds go, keep an eye on 9th-seeded Sacramento State, who went just 8-12 in Big Sky play but rate well and would give EWU a good game in a hypothetical quarterfinal.

This should be an incredible tournament. The Big East rated the highest of any conference in terms of average BracketBot rating, even higher than the lofty Big Ten’s great year, and this should be a great tournament. Villanova actually rates as the best team, just by a hair (nearly identical with Butler, Creighton and Seton Hall, in that order), but a tricky quarterfinal matchup with Xavier drops their odds down below that of Creighton, who will have the theoretically easier QF matchup with either Georgetown or St. John’s. 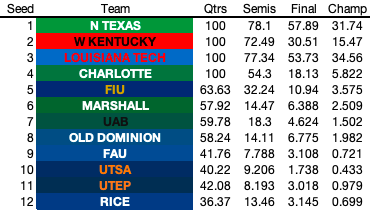 C-USA is still the only conference using the late-season pod system, which freezes its teams in place after 14 conference games to make sure that all the top teams can play each other twice. That’s how FIU wound up the #5 seed ahead of Marshall despite the Herd having one more conference win, and same with UTSA over UTEP. The top 5 have just been battling it out, and we’ll see a couple more of those teams matching up again in Frisco, hopefully. The top three teams all finished within a game of each other at 14-4 and 13-5, and even though Tech is the favorite, I know North Texas is a team people like a lot out of this conference too.

That wraps up part 3 of the conference tournament preview series – the last group, featuring the 9 conferences not yet profiled, will be up on Wednesday.