It’s hard to believe, but it’s already conference tournament time! The first games of postseason play tip off this Tuesday, and I’m here to help you navigate these next couple of weeks. I’m going to split the 32 conferences into 4 posts, since not everyone’s done with their regular season yet, so here’s the first batch! 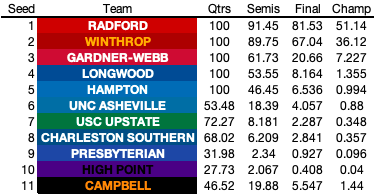 A big help for top-seeded Radford to be able to play this entire tournament at home, so long as they keep winning. BracketBot actually likes Winthrop as the top team in this league on a neutral floor, but it won’t be on a neutral floor if that 1-2 matchup becomes the final. One team to look out for is Campbell; despite coming in last place in the conference, they are considered 4th-best by BracketBot overall and 4th-most likely to win this tournament despite having theoretically the toughest run. The Fightin’ Camels were 6-12 in conference play, which is pretty good for a cellar dweller.

Liberty has been the class of this league all year, drawing a lot of attention for being undefeated almost through New Year’s, and it’s no surprise they are heavy favorites here. With 4 losses, only one of which is to a good team (LSU), their at-large hopes are nearly nil, but 82% is still pretty good odds. Liberty and North Florida split their series this year, each winning at home, so big for Liberty to secure home-court through this tournament. #5 seed North Alabama is ineligible for this year’s NCAA tournament, but they are participating here – I have not been able to find any info on what the league’s plans are should they win the tournament, but that situation is fairly unlikely.

The Horizon has introduced a new format to their conference tournament that seems designed to mess with me. Top seeds Wright State and Northern Kentucky have byes to the semifinals, in a sort of ladder-style, and 3rd seed Green Bay has a first-round bye. The league’s other six participating teams (Detroit-Mercy is ineligible for postseason play this year) meet in the first round, and this tournament re-seeds at every possible step. So, if for example, IUPUI were to win a few games in this tournament, they’d play the highest remaining seed at every step. Wright State and Northern Kentucky are a bit ahead of the field even without the advantages this bracket format gives them, so I’d expect one of those teams to cut down the nets.

Colgate won the Patriot League by two games in the regular season, and they rate more than 50 spots better than any other team in the conference through BracketBot’s ratings. Couple that with home-court throughout this tournament and it’s no surprise they’re pretty big favorites. 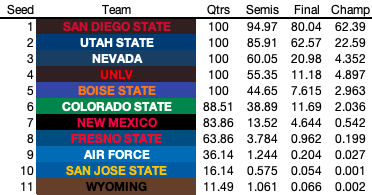 San Diego State has been one of the stories of this season – their long stretch towards an undefeated season, which ultimately came up short – but there are a handful of pretty good teams in this conference that really could stop them from running through this tourney. UNLV gets a sizable boost from this tournament being in Vegas – they’re about twice as likely to win it as they would be on a neutral court, and that gives them another shot at SDSU, who they’re the only ones to have beaten. The Mountain West will be the first tournament to crown a champion this year, with the title game being Saturday afternoon.

OHIO VALLEY
Wednesday 3/4 – Saturday 3/7
All games at Evansville, IN

Here we have our first true ladder tournament – the OVC has done this for a while, in part seemingly because Belmont and Murray State have traditionally been so far ahead of everyone else. That’s no different this year, and those two schools will get a pass to the semifinals while the 5-8 teams would have to win twice to reach that stage. Belmont has a big advantage in this tournament, in part from their higher rating but also from avoiding Austin Peay on their side of the bracket. 4th seed Eastern Kentucky is the most likely semifinal opponent and a much easier one. (Commiserations to Tennessee Tech, SIU-Edwardsville, Tennessee Martin and SEMO, who failed to qualify for this 8-team tournament. The 8 teams participating all had records of 7-11 or better in conference play.)

The NEC has been uncharacteristically fascinating this season. The regular-season conference champions, Merrimack, are not participating in this tournament because it’s their first year playing Division I ball and they’re therefore ineligible for the NCAA tournament. So it’s teams 2-9 competing in this tournament. (Wagner and Central Connecticut State failed to qualify.) There are four teams in this tournament that are really close to each other in BracketBot ratings: Robert Morris, SFU, Sacred Heart, and 7th-seeded Bryant, who rate relatively well in this system for their sub-.500 overall and conference records. It’s an uphill battle for them though, likely having to play every game on the road, starting with a game against the highest-rated team in the conference, St Francis (PA). Conversely, Robert Morris gets to play all their games at home, a big boost for their chances (would be about 21% chance to win at a neutral site).

Having grown up in and around St. Louis, this is my favorite conference tournament – I remember going to a few games pulling for the Salukis of SIU to take down mighty Creighton, who always seemed to have their number. Creighton’s gone to the Big East but this tournament continues to be exciting in most years. Northern Iowa’s got a huge edge in this tournament, though, with about even odds to take the league’s tournament bid. (With a loss, UNI would probably fall short of an at-large bid.) Evansville has been a fascinating team to watch for all the wrong reasons – this team that beat Kentucky earlier in the season is about a 6000-1 underdog at Arch Madness.