Hey all, welcome to the first Season Sim of 2020! In these posts, I’ll be taking my crystal ball to the rest of the 2019-2020 season and guiding you through what will definitely happen!*

(*according to one single solitary simulation of the rest of the season, based on the BracketBot ratings)

Here’s how this version of this season panned out. Look into my crystal ball… the date is now April 6, 2020, and we’ve all just watched…

Scenario: we’ve all just watched as a pair of teams that once would’ve been viewed as really unlikely champions went at it for the title. #2 seed West Virginia were the champions, defeating #4 seed San Diego State 62-59! The Final Four was made up of a pair of #2 seeds and a pair of #4 seeds, the others being Butler and Ohio State in that order! Here’s the tournament bracket:

A few wild things here – surprise Sweet 16 runs from Yale, Iowa and St. John’s, while Kentucky-Indiana is a surprising 8-9 matchup and the Big Ten gets 10 teams into the tournament. Let’s recap it, starting with the conference of the new champions WVU! 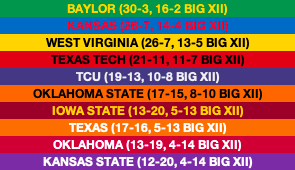 Baylor would get to 11-0 in Big XII play before falling at home to WVU, and eventually win the conference when Kansas lost their final regular season game in Lubbock. Both Baylor and Kansas were deemed worthy of 1 seeds, though, in part because neither of them lost a game against a non-Q1 opponent (21-0 for Baylor outside Q1, 19-0 for Kansas). West Virginia fell to KU in the tournament semis, and was the highest-rated 2 seed. Oklahoma State fell to St. Mary’s in the First Four and had to watch dejected as they went on to upset Oregon. 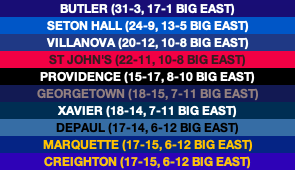 The Big East did a pretty good job of cannibalizing themselves in this playthrough, save for a 1 1/2-horse race at the top. Creighton, Marquette, Xavier, Georgetown are all legitimately good teams being left out here for one reason or another. Georgetown upset Villanova in the tournament quarterfinal and would’ve made the tournament had they beaten Seton Hall in the semis. Butler’s lone conference loss was at Marquette on February 9, but they miss out on a #1 seed by losing the conference tourney final and settle for a #2. 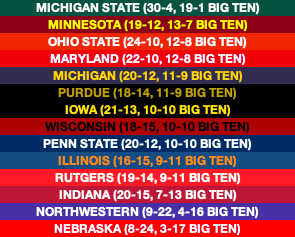 The Big Ten, on the other hand, does a pretty good job of maxing out their bid total by winding up with a high number of teams at .500 or better. Indiana in particular is a big get for the B1G: they were on the outside looking in, as the #12 seed in the conference, but after upsetting Michigan and Maryland in the conference tournament they actually got in comfortably as a #9 seed! Michigan State did not lose a game in this simulation until the Elite Eight, rolling through the rest of Big Ten play to finish 19-1, winning the conference tournament and getting the third #1 seed. Penn State reaches the NIT quarterfinal. 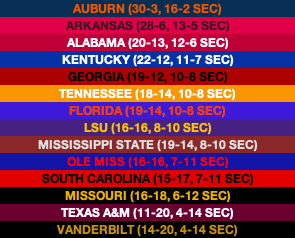 Like the Big East and Big Ten, the SEC has a runaway winner, and that’s Auburn. The Tigers lose just twice in SEC play, @Florida and @Tennessee, but those along with a conference semifinal loss to Kentucky keep Auburn off the top line of the bracket. It’s a big conference season for Arkansas, who come the closest to Auburn, win the conference tournament with wins over Florida, Alabama and Kentucky, and get rewarded with a #3 seed. 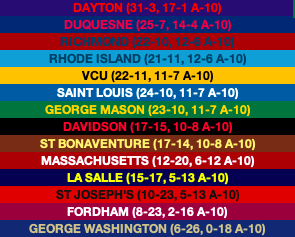 By conference tournament week, it’s common belief that the A-10’s three best teams are all on the same side of the bracket: Dayton, Rhode Island and VCU. That plays out in the final, when Dayton smacks SLU, who’d beaten both Richmond and Duquesne to get that far. Saint Louis turns out to be the best shot at a bid thief that we get – there really weren’t any this time around. Dayton’s run was pretty marvelous, which is why I’m covering the A-10 here at all (I probably won’t every time). The Flyers’ quest to go unbeaten in A-10 play ends with a visit to VCU on February 18, but they finish the regular season 31-3 and with no losses outside of Q1, so it’s a thoroughly deserved 2 seed. VCU and Duquesne both reach the semifinals of the NIT, but both lose to Miami: Duquesne in their semi and VCU in the championship game. 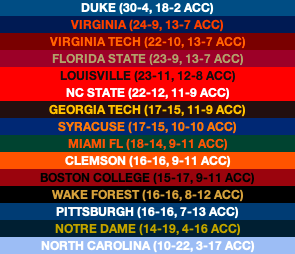 It’s kind of a down year for the ACC, which makes it even more hilarious that UNC finishes in last place. Duke only loses one more the rest of the way, to NC State on February 19, and wins the ACC by an astonishing five games. Despite a loss in the ACC final, they enter the tournament as the #1 overall seed at 30-4. Louisville and FSU, on the other hand, struggle a bit through ACC play and limp into the tournament both as #6 seeds. FSU has a stretch of 5 losses in 6 before responding to finish with six straight ACC wins, while Louisville gives UNC one of their three ACC wins on the year. FSU is more highly regarded going into the ACC tourney, but the Cards beat them in the 4-vs.-5 matchup before losing to Duke in the semis. Miami wins the NIT, beating VCU in the final. 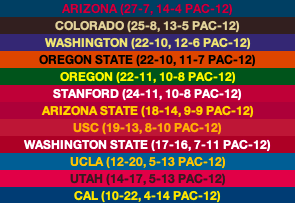 The Pac-12 is a bit stronger this year than usual, and that plays out with them getting five teams into the tournament. Unlike a lot of the other conferences, the Pac-12 is a pretty exciting race, only decided for good when Arizona beats Washington in the season finale (otherwise it would’ve been a 3-way tie up top!). Arizona had been 3-4 in conference play after back-to-back road losses to ASU and Washington, but won their final 11 games and the conference tournament. With that much of a hot streak going, the Cats get a #3 seed in the tournament, and Colorado, Oregon and Washington are a 4, 5 and 6 respectively. Unfortunately, outside perception of the conference doesn’t change at all when they only win two total games in the tournament, including first-round upsets of Oregon (St. Mary’s) and Washington (Iowa). Oregon State reaches the semifinals of the NIT, and Arizona State reaches the quarters. 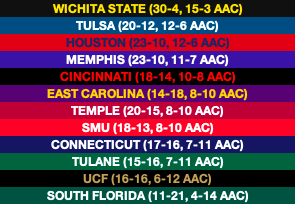 An excellent conference run for Wichita State, who lose away at the #2-#4 teams in this conference but no other games, earning themselves a #3 seed in March. It’s a really surprising outcome for 2nd-place Tulsa, who have no chance of making the tournament save for winning the conference’s autobid but string together a 12-6 conference record. Houston does well to finish 3rd, becoming a lock by the time of Selection Sunday despite being upset by Temple in the tourney semifinals. Temple was an autobid thievery threat here, but fell in the conference title game and went to the NIT. 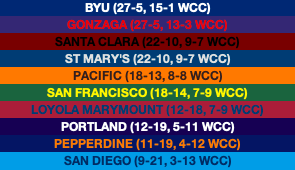 Definitely the biggest surprise as far as conference champions are concerned. Gonzaga was at one point 9-0 in conference play, having handed BYU what would be their only conference loss, but surprisingly lost to Loyola Marymount at home, then St. Mary’s and BYU on the road to go 13-3 in conference. Then, the Zags, getting a bye to the tourney semifinals due to the ladder format, lose that game to Santa Clara. St. Mary’s gets the very last at-large bid in the tournament, narrowly chosen over Duquesne, and makes good, beating Oklahoma State in Dayton and then Oregon in Albany before losing to eventual Final Four team Ohio State.

A lot of quality teams coming in from the lower-ranked conferences. SDSU and Liberty have gotten a lot of publicity, but UNI has been on the fringes of my top 25 for several weeks, and they put together a solid 14-4 MVC record here and go into March at 26-5, good enough for a 5 seed! Furman, 14-4 as I’m writing this, runs the table in a really strong SoCon, entering the tournament at 27-4 & getting a #10 seed. SDSU, still undefeated at time of writing, loses the second-to-last regular season game vs. Colorado State, finally breaking their undefeated run, and then loses to UNLV in the Mountain West final, dinging them all the way down to a #4 seed in the same pod as Northern Iowa. In the tournament, though, they make good, beating Stony Brook and Kent State (who had upset UNI), then the highly regarded Baylor and Auburn in the West Regional, and then Ohio State in the Final Four before falling in the championship game!

That’s all for this version of Season Sim! I’m gonna be back doing these until the start of March, probably twice a week like I did last year. I’ll also have my first real bracketology update later on this week, probably Friday, so BracketBot will finally be living up to its name.