It’s time to preview another group of conference tournaments! I had originally thought to split the 32 conferences into four groups and preview them eight at a time, but to this point, only 13 conferences have finished regular season play. So, you’ll get five more tournament previews in this update, and the rest… well, at some point. I may extend this series to five parts, or the next two parts may be extra long, you’ll have to wait and see.

Vermont is the best team in this conference by a decent amount, but the advantage from being able to play the whole tournament at home in Burlington makes their advantages even bigger. On top of that, this tournament is re-seeded after the first round, so Vermont gets another advantage as they can play the lowest-seeded team remaining in round 2, instead of automatically playing the 4/5 winner. As such, only Gonzaga is a bigger favorite to win their tournament among those I’ve previewed thus far. Only the top 8 teams qualified for this tournament – sorry, New Hampshire. 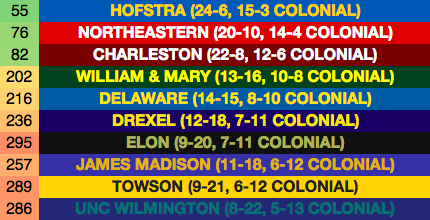 Around two months ago, Hofstra was right up there with Lipscomb, Belmont and even Wofford on the list of top teams from one-bid leagues. While some of those teams have elevated their game (especially Wofford), Hofstra’s reputation has dropped. Late-season losses to James Madison and UNC-Wilmington mean that instead of being a scary 12-seed in a tough-to-pick 12-5 matchup, Hofstra looks more like a 14 seed if they get there at all. Speaking of which, here are their chances! The Pride benefit from having both Northeastern and College of Charleston on the opposite side of the bracket, as they’re the teams that pose a major threat, but still Hofstra grades out as having a less-than-50% chance of making it to the NCAA tournament. 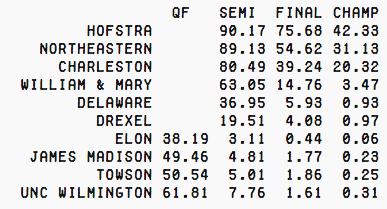 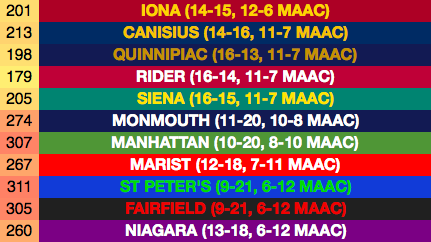 It’s rare to see a conference race that was as wide-open as the MAAC’s was this year – flip one result, Iona’s win over Monmouth in the first conference game back in December, and you’d wind up with a 6-way tie at the top. As it is, Iona does get the top seed, but on a neutral floor with a bunch of equal-looking teams, it doesn’t do them any favors. Sure to be one of the most unpredictable tournaments, I’m excited to see what happens. Even 10th-seeded Fairfield has a pretty good shot at making the championship game. 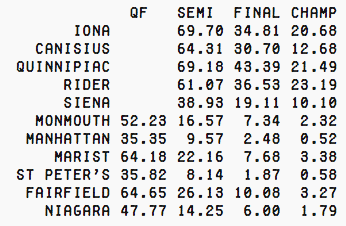 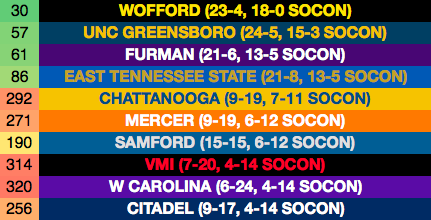 It’s been a weird year in the SoCon too – look back to December, when an undefeated Furman was nationally ranked, to the conference season, with a weird dichotomy between the four good teams and the six bad ones, to Wofford’s undefeated run and now seemingly safe place in the tournament, regardless of what happens in Asheville this weekend. BracketBot is a little lower on Wofford than most (a 9 seed instead of what seems to be a consensus 7), but I agree that they probably make the NCAA tournament as long as they don’t lose to one of the bottom 6 teams here. The possibility of a 2-bid SoCon is alive and well, too, because Furman, ETSU and UNCG (in that order) have pretty good spoiling chances. This should be a fun one to watch.

Only 8 of 9 teams qualify, so last-place Denver will be sitting at home. The Jackrabbits of SDSU have been the class of this league for several years now, and even though this is a somewhat down year for them, it seems to be a down year for just about everyone in the Summit. As a result, SDSU is a pretty big favorite at 62% – that’s a high percentage for a tournament that’s happening on a (theoretically) neutral floor. I’d expect the Jackrabbits to be a 14 seed (or possibly 15) if they’re able to win the bid, while any of these other teams is likely a 16.