Hello all, and welcome to another edition of Season Sim! With the regular season winding down, there are more and more similarities between successive simulations, but that doesn’t make a look into the future any less enlightening! Let’s get another look into how BracketBot might see the season ending after Saturday’s slate of games. Let’s take a look into my crystal ball… the date is April 8, 2019, and we’ve all just watched…

SCENARIO: we’ve all just watched the Houston Cougars win the NCAA tournament for the first time, building on the legacy left by the Houston teams of the early 80s, after a 76-69 win over North Carolina. The 3rd-seeded Cougars defeated 5th-seeded Wisconsin to reach the final, while the other semifinal was a battle of top ACC teams with (2)UNC beating (1)Virginia. Let’s look at the NCAA tournament first.

Not a ton of craziness in this particular tournament outcome – it’s OK, some years are just duds. Favored teams were 27-5 in the first round, the largest upset being Utah State over Maryland.

Fascinating that a tournament could be so upset-free that one of its biggest surprises happens in the Final Four, but there you have it! UNC-over-Virginia is the fourth-biggest upset of the tournament. Let’s get into the conference reviews – a bit shorter today. 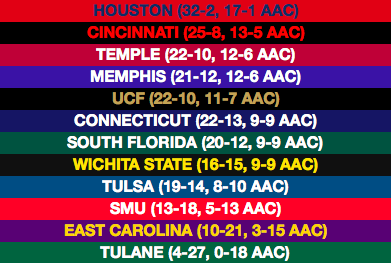 Houston won out through the regular season, while the AAC’s other top teams had a tough time of it. That goes especially for UCF, who lost three of their last four games, lost to Memphis in the conference tourney quarterfinal, and consequently missed the tournament entirely, being the first team left out. Another miracle UConn run gets them into the field, and as you can see above, they went one step further in knocking K-State out of the tournament too before falling to Carolina. 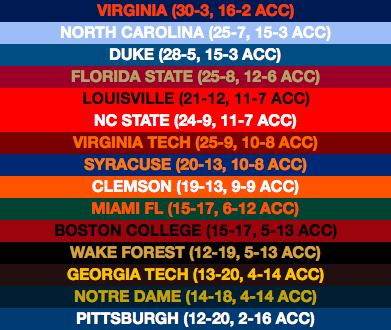 UVA’s only losses in the regular season are the two they’ve already suffered to Duke. Duke, for their part, lost only once more in the regular season but it was the return trip against North Carolina. The hype level is high for a potential third matchup between Duke and Carolina in the ACC tournament, but it’s ruined by an insane run from Virginia Tech. The Hokies beat North Carolina, Duke and then Virginia on consecutive days, vaulting all the way up to a #3 seed (probably would’ve been a 5 or 6 otherwise). 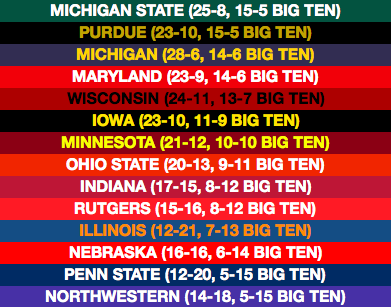 Michigan and Michigan State split their set of games, though Michigan loses both of their other two games (Nebraska/Maryland) to finish in third. Purdue’s surprising loss to Illinois keeps them from being the top seed in the conference tournament. Minnesota, Indiana and Ohio State all fall within the last four teams into the tournament, so we see a rare conference matchup in that round with the Gophers and Hoosiers playing each other. 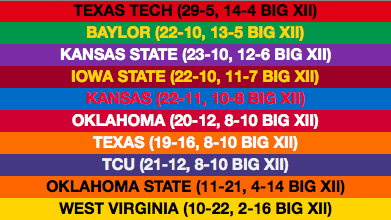 The only Big XII game Kansas wins going forward is Oklahoma State, so the streak ends in this sim. Texas Tech wins both the regular-season and tournament titles, clinching both with wins over Texas. As is becoming customary, all eight of the Big XII’s top teams are tourney teams, so it looks like that will probably happen. 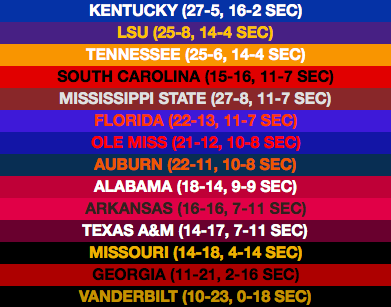 Both LSU and Tennessee split their remaining four games while Kentucky wins out, winning them the conference regular season and resolving the current three-way tie. The conference tournament is a disappointment for all three, LSU the only team that wins even one game. Mississippi State gets handed an easy roadmap to the tourney championship, only having to beat Missouri, South Carolina, Auburn and Florida. 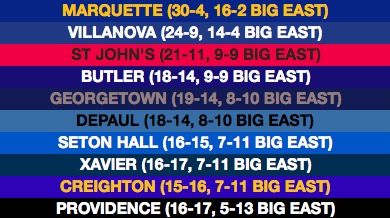 The whole Big East season has been Marquette, Villanova, and then everyone else, and the ‘everyone else’ fall flat in this sim. None of the other teams even finish above .500 in league play, and they almost all miss the tournament after the contenders go out early in the Big East tournament. St John’s settles for the First Four and a matchup with Ohio State after getting pasted by DePaul in their quarterfinal, and the others miss out entirely. 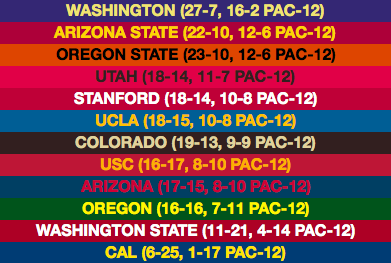 A good result for the Pac-12 overall, as the two teams currently poised for tournament berths both get them. ASU is in despite losing twice to Oregon State, both in Corvallis and in the conference tournament, while even though Washington takes a surprising defeat to Stanford, they still win the conference easily and get a 7 seed. Oregon State then establish themselves as bid thieves, beating both of the top two teams to get themselves a decent 11 seed in the NCAAs.

Alright guys, hope you enjoyed this Season Sim! I’ll be back here with a new top 25 ranking tomorrow, and a BracketBot update on Tuesday!