Hey guys, welcome to another Season Sim! Apologies if you were looking for this post on Sunday – I was caught up doing other things over the weekend. I’ll be changing up the format of Season Sims as we go forward, but this one will be pretty much the same – I turned over the rest of this season to BracketBot and let it do its thing. The rest of the regular season, the conference tournaments, and the NCAA tournament are all accounted for here. So, take a look into my crystal ball… the date is April 8, 2019, and we’ve all just watched…

SCENARIO: we’ve all just watched Gonzaga take revenge for their loss in the 2017 championship game, beating the North Carolina Tar Heels 82-81. The Zags, as is becoming the norm in these simulations, won out for the rest of the season, finishing their record at 38-2 (you’ll see win-loss records throughout this post – those are pre-NCAA tournament). The Zags were the only 1-seed to make the Final Four, along with 2-seed Carolina, and a pair of teams from the Big XII in Iowa State and Texas Tech, a 3 and 4 respectively. Here’s the tournament bracket:

As usual, there’s a lot to process here, so just survey the scene. We see:

– Duke losing in the second round to Iowa (and getting beaten by a lot), eventually leading to a massive CyHawk rematch in the Elite Eight
– Not only is Gonzaga the only 1 seed in the Final Four, they’re also the only ones in the Elite Eight after TTU and Louisville win close games against Virginia and Kansas, respectively
– Some unexpected participants from power conferences: Rutgers wins the Big Ten tournament, then knocks Virginia Tech out of the dance, which is crazy; also crazy, the team they beat to get into the tournament was Illinois. Colorado is also here as a 13-seed after surprisingly winning the Pac-12’s automatic bid. They lose to Nevada in overtime, but overall that represents the Pac-12 surprisingly well
– Both at-large teams making it through the First Four win another game; we have UCF over Buffalo and Ole Miss over Villanova
– UMBC is also here, this time faced up with UNC, but there’s no repeat of last year’s miracle
– And for what is not the first time this season of sims, Grand Canyon University wins an NCAA tournament game.

There aren’t really any shocking upsets in this field, but here are the biggest by the numbers (with percent chance of that team winning):

Overall, favored teams from the round of 64 on went 48-15, which is slightly better than you’d expect (though not much better, favorites win more often for a reason!)

Alright, let’s get to the conference breakdowns! 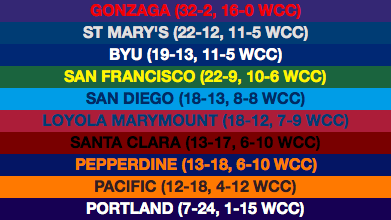 No surprises here – the WCC is pretty close to ending its regular season anyway (these teams only have three or four more games to play each). Gonzaga still has to play BYU and St Mary’s once each, but there’s such a gulf between them and anyone else in this conference that it would be more surprising if they didn’t run their record to 16-0. In fact, it’s kinda disappointing that they only beat St Mary’s by 9 in the conference championship. At any rate, there are three teams nationwide that have positioned themselves far above the rest, and Gonzaga is one of them. St Mary’s is a 3 seed in the NIT, but loses in the first round. 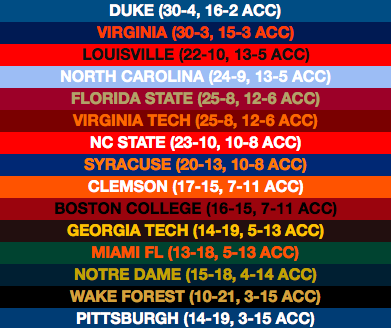 The other two of the consensus three best teams in the country both live here – Duke and Virginia. IRL, they’ve already played twice, with Duke winning both matchups, so a potential third game between the two would have to wait at least until the ACC tournament. Each loses one more game before the tournament; Virginia to Louisville in their next game, and Duke to Virginia Tech. When Duke/Virginia III arrives, each had just dispatched a major rival in the semifinal (Duke beating UNC for a third time, UVA beating Virginia Tech for a third time), but Duke is unable to beat UVA for a third time, getting smoked by the Cavs. Despite that, Duke is still picked as the #1 overall seed, with Virginia #2 overall. 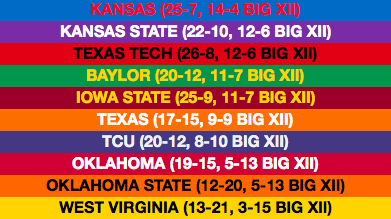 It’s starting to look more and more like the streak is going to continue, and Kansas is actually gonna win the Big XII again. While at this point on February 20 they trail Kansas State by a game, but the Jayhawks win out through the regular season again this time, while the Wildcats drop three of their last five to finish 12-6. Both teams, though, dropped their first game in the Big XII quarterfinals, KSU in particularly embarrassing fashion (losing to WVU by 11), opening the door for Iowa State and Texas Tech to make the final pretty easily. While one of those teams obviously had to lose, they both carried that momentum into the tournament, and both made the Final Four! 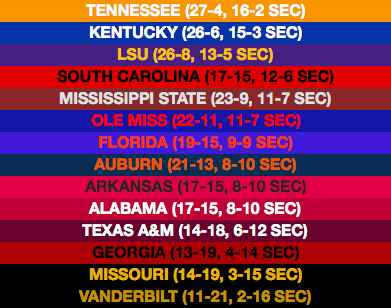 It’s a rollercoaster end to the season for LSU, who lose four of their six remaining games, including the last three, but then run all the way to a conference tournament championship. Tennessee’s only two conference losses came to Kentucky, though you could deduce from the above information that they took a loss to Auburn in the tournament quarterfinal. Kentucky lost early too against Florida, ensuring that no SEC got a #1 seed and giving that final spot to Kansas. 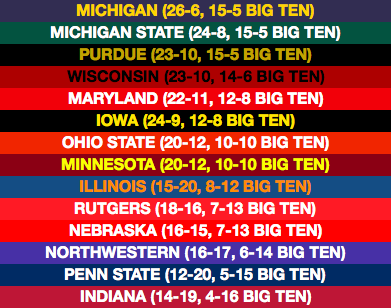 It’s a tough end to the season for all of the Big Ten’s top 3 – Michigan, MSU and Purdue – who all go 3-2 to go from a current 12-3 record to 15-5. Michigan and MSU split their pair of games that’s yet to be played, while Michigan also lost to Minnesota and Michigan State lost to Nebraska. Purdue dropped a pair of games against Nebraska and Ohio State to also land at 15-5, making Michigan the #1 seed based on head-to-head. Not that it mattered in the conference tournament, as a pair of unheralded teams on late-season surges went totally ballistic! Rutgers eliminated Ohio State in their first game, then took on Michigan State and Purdue and won both to make the final. Illinois, meanwhile, took down Minnesota in the 8-9 game before knocking out both Michigan and Wisconsin to do the same. It was a bizarre few days, even weirder when Illinois completely folded in the final. So Rutgers is in the dance, grabbing a 12 seed and (as mentioned above), they continued their crazy run by winning in the first round. 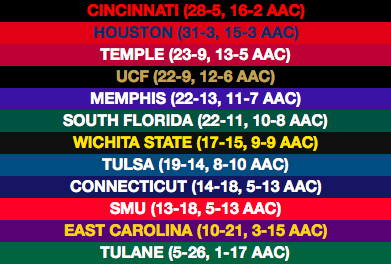 No embarrassing losses for Houston (UCF at home, @Cincinnati) but it has to be disappointing for them to not win a share of the conference regular-season title. It’s good work by Cincinnati to deny them that, though, as the Bearcats won their last 6, including the win over Houston and a sweep of UCF. The Knights, for their part, just barely get into the NCAA tournament after finishing slowly and losing to Memphis in the conference tournament. They’re in the First Four, though as we saw above, UCF still wins two games in the NCAA tournament, finally falling to Final Four-bound Iowa State. 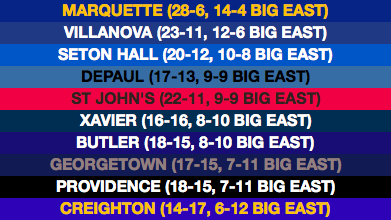 A really tough ending for Villanova, losing four of their last five to finish two games behind Marquette and fall totally out of the AP poll. The only game they win in that span is against Butler, so it must motivate them to see the Bulldogs as their first conference tournament opponent – they did take care of business to beat them and then Seton Hall to make it to the end. Marquette, for their part, also lost two games they probably shouldn’t have, including at Providence, but these two teams can pretty much coast to the end. St John’s and Seton Hall make the tournament too, but the rest of the conference is shut out of the NCAAs. 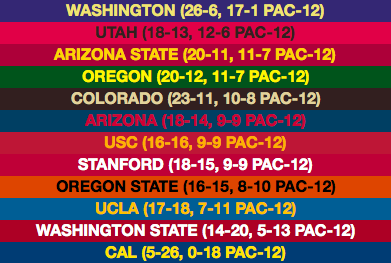 Washington wins out through the regular season – we really should take a step back and appreciate the work they’re doing to keep the Pac-12 afloat. It would be pretty odd if the margin between 1st and 2nd in a major conference was five games, but that’s what happens here (unless you dispute the assertion that the Pac-12 is a major conference, but you’ll get opposition from me at least). Arizona State is the victim of a bubble crunch here – there are a bunch of bid thieves here, including one in this very conference, and the Devils finish as the first team left out of the tournament. Of course, they certainly could’ve avoided losing to Washington State for a second time, as the conference tournament went absolutely haywire on quarterfinal day. The top four seeds all lost, leaving Colorado as the highest-seeded team left, and they took care of their business.

A lot of bid thieves this time – Utah State would’ve been an at-large team either way, but Bowling Green, Davidson, Rutgers and Colorado all took bids off the board. The consequences are the number of current bubble teams who were nowhere to be found in the tournament, including Arizona State, Butler, NC State, Alabama and Clemson.

Nebraska wins the NIT, beating Toledo in the final, while Temple and Butler were also in the semifinals.

Alright, that’s it for this Season Sim! I hope you enjoyed this look into the crystal ball – I’ll see you this weekend with another one. Let me know if there’s anything else you’d like to see in this series – in the future, I’m going to morph this into a series of tournament predictions, especially in conference tournament season. I’ll have another bracket update Friday (or maybe tomorrow?), so take care until then! Thanks for reading along!